Fungal infections of the nails

A fungal infection of the nail is the most common abnormality of the nail affecting about 10% of the population.  The medical name is “onychomycosis” and it is usually caused by the fungus that also  causes athlete’s foot, ringworm, and jock itch. 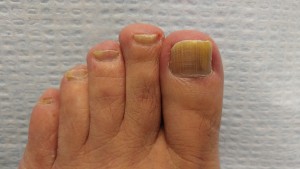 ected, the nail becomes yellow and thick.  Sometimes other colors like white, black, or green can occur as well.  The nail may also become brittle and flake easily.   Fungal infections of  the nails usually involve the toenails, but fingernails can also be infected.

The nails become infected  from direct spread of the fungus from the adjacent skin.   The fungus spreads from the skin to the under surface of the nail infecting the nail plate.  Another manner of infection is from direct contact with contaminated objects such as nail clippers or towels.  Aging is a common risk factor because the nails grow slower and there is  diminished circulation. Having athlete’s foot predisposes a person to developing nail fungus.  We  tend to see it more often in people who get manicures and pedicures and those who go the gym or swimming pool and walk around barefoot.

Should nail fungal infections be treated?

In most cases, fungal infections of the nails is not a serious medical condition.  The fungus does not spread into adjacent tissue or into the blood stream and make people ill.   Many people live their whole adult life with fungus in their nails and are completely healthy.  The medical community generally recommends that people who have diabetes or swelling of the legs  be treated for nail fungus because the infections can lead to secondary bacterial infections such as cellulitis.    Treatment is also recommended if the nails are painful or uncomfortable because they are thick or become ingrown.

Most people want treatment  for cosmetic reasons.  They feel the nails are ugly.

How do we treat onychomycosis?

The first step in treating nail fungus is making the correct diagnosis.  While fungus is often the cause of a thickened nail, other conditions like psoriasis, lichen planus and trauma to the nail can also cause deformed nails.  To be sure, we usually start by testing a nail clipping  to confirm a fungal infection is present.

Once the diagnosis is established, a patient may consider oral therapy or topical treatments.   The pills have a risk of interacting with other medications and of causing liver damage.  We usually test the blood for liver changes after one month of therapy.  Even though it may take more than a year for a toenail to grow from the base,  toenails are treated for 3-6 months and fingernails for 6 weeks.

New prescription topical medications like Jublia© and Kerydin©  are applied once daily.   These drops are expensive and need to be used for over a year until the new uninfected nail completely grows out.  The advantage of topical medications is that there are virtually no side effects and blood tests are not needed. Howver, topical therapy is not as effective in clearing nails of fungal infections as oral medication.  Over-the-counter creams, gels and sprays do not penetrate the nail plate sufficiently to be effective.  Unfortunately laser treatments do not work well, are expensive  and are not covered by insurance.

One problem is that once the nail is clear of fungus, it can become reinfected, and a patient may need to be retreated.

How can I avoid getting a nail fungus infection?

Hyperhidrosis: What You Should Know & Treatment Options
July 7, 2020

Hidradenitis Suppurativa: All About This Difficult Skin Condition
May 2, 2020

Hand Dermatitis: Everything You Should Know for Prevention & More
April 3, 2020